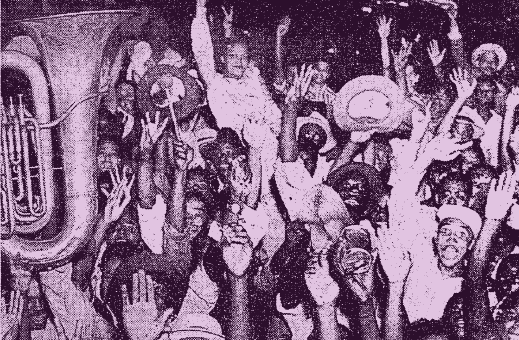 At seven o’clock on the evening of August 15, 1945, President Harry Truman went on the radio to announce to America that World War II had finally ended. Crowds formed outside the White House gates to see the President, as could be expected in the capital city. But for many locals, the real celebration happened further uptown, on U Street.

“That giant firecracker of a street from Seventh to Fourteenth streets, was one tremendous explosion,” a reporter wrote. “They let out one whoop for the boys who were now safe and would soon be coming home. Whistles blew, telephone books went up in shreds, saucepan and spoon parades began forming here and there …automobile horns honked as traffic was tied up in a knot several blocks long … a group of teenagers snitched one of [a policemans’] red lanterns and began a lantern parade.” One gentleman brought his tuba.

For U Street, such eruptions of public joy were hardly uncommon. Above is a picture of the street in June 1937 in another “typhoon of joy,” on the night Joe Louis won the heavyweight championship: The sidewalks, deserted a moment before, became alive. A young sheik, wearing a sports coat with awning stripes, danced down the sidewalk with a U street belle … Merrymakers came running out of homes, restaurants and private clubs to go along with the whirlwind … Thousands skipped along U street, making phantom punches, waving bottles, touching off firecrackers and yelling over and over the triumphant cry: ‘Ain’t nobody can beat Joe Louis!’

One resident of a second-floor U Street apartment recalled much later, “When I looked out the window [after the Louis fight], U Street was wall-to-wall people.” Although “hundreds of policemen and plain-clothesmen patrolled U Street,” a reporter noted, “at a late hour nothing had happened beyond an explosion of happiness.”

U Street has been, for decades, a place of celebration and of gathering for city residents. “There was a time, from the 1920s to the 1960s, when U Street was a place of parades, both small and large,” the Washington Post wrote in the 1980s, in a collection of memories about the neighborhood. “If you were at [14th and U], you always had the sense that something big was about to happen,” recalled tennis legend Arthur Ashe, who practiced at Banneker Junior High in the 1950s.

“It was like a party up there. It was really, really nice on U Street,” remembered Cecilia Scott, who ran a legendary nightclub on U Street, for the same Washington Post article.

It’s no mistake that when Martin Luther King, Jr. led a march for home rule in the District in 1965, he led it down U Street, or that when Marion Barry held his first inaugural parade in 1979, only the second mayor elected by the city’s residents, he led it, not down Pennsylvania Avenue, but U Street. U Street’s ethos is of public gatherings and celebration for the people of the city. If the city has a heart — and we believe it does — it beats beneath U Street. If it has a soul, it is embodied by the U Street neighborhood.

By the 1980s, U Street had become a “barren landscape” of burnt-out buildings, drug dealing and crime, a victim of the 1968 riots, a struggling economy, and neglect.  But as the neighborhood has revitalized in recent years, U Street’s spirit has returned in force.

Just read accounts of the night of President Obama’s 2008 election victory: “In the driving rain, people fill[ed] Washington D.C.’s U Street corridor in an impromptu celebration … supporters chanted, ‘Yes, we can!’ People danced on bus shelters.  Strangers hugged … Clubs and cafes on U Street were jammed with revelers, erupting at each scrap of news.”

From a second-floor window near 13th and U – and later from U Street itself – Justin Rood witnessed the spectacle following Obama’s 2008 victory. Although a Washington, D.C. native, he knew little of the street’s long tradition for public celebrations.

Justin had recently moved to the U Street neighborhood, into a house reportedly once home to Duke Ellington. A music lover, he quickly became enchanted with the community – its abundance of live music, its liveliness, its mixture of longtime residents and newcomers; and the rhythm of celebration and coming together that seemed to punctuate the life of the neighborhood, from the battalions of marching bands in the Howard Homecoming parade, to the drum circle in Malcolm X Park, to the United House of Prayer’s music-rich Memorial Day parade.

One night he had a vivid dream: it was twilight on U Street, and quiet. But the stillness was moved by a low rumble. In the distance he saw people coming slowly toward him, and the rumble grew. He made out the drums of a marching band. Then horns. The procession came closer and he saw it was a parade, a procession of people on foot – first a marching band, then his neighbors, and strangers in costumes, and more musicians. Spoons were banged on pots, children clapped from atop their parents’ shoulders.

As the parade moved down U Street and into the neighborhood, neighbors came out of their houses to see the spectacle, and joined in themselves.  It was pure pleasure, a celebration of life on U Street, of life in the city, of life itself. He woke up and wondered, why does this funk parade not exist?

In 2013, Justin partnered with Chris Naoum of Listen Local First, which encourages Washingtonians to hear, see, and support local musicians. Together they met with dozens of local businesses, nonprofits, and community leaders, who shared the vision of a Funk Parade, and a celebration of U Street’s history and present-day role as a home to live music and the spirit of coming together for the city. In the years since, hundreds of thousands of Washingtonians from all corners of the city have come together for the Funk Parade.

In 2018, Just and Chris saw an even greater vision for Funk Parade, viewing it as a vehicle for change. They decided that the best way to sustain and grow Funk Parade was to pass it on to a mission-aligned nonprofit organization, who could manage the large production and benefit from its proceeds. In their pursuit of finding a new home for Funk Parade, they landed on The MusicianShip, which facilitates music lessons, experiences, and opportunities to benefit youth who need us most. With your help, The MusicianShip can keep Funk Parade alive to benefit thousands of youth and the communities in which they live., Get Involved Now! 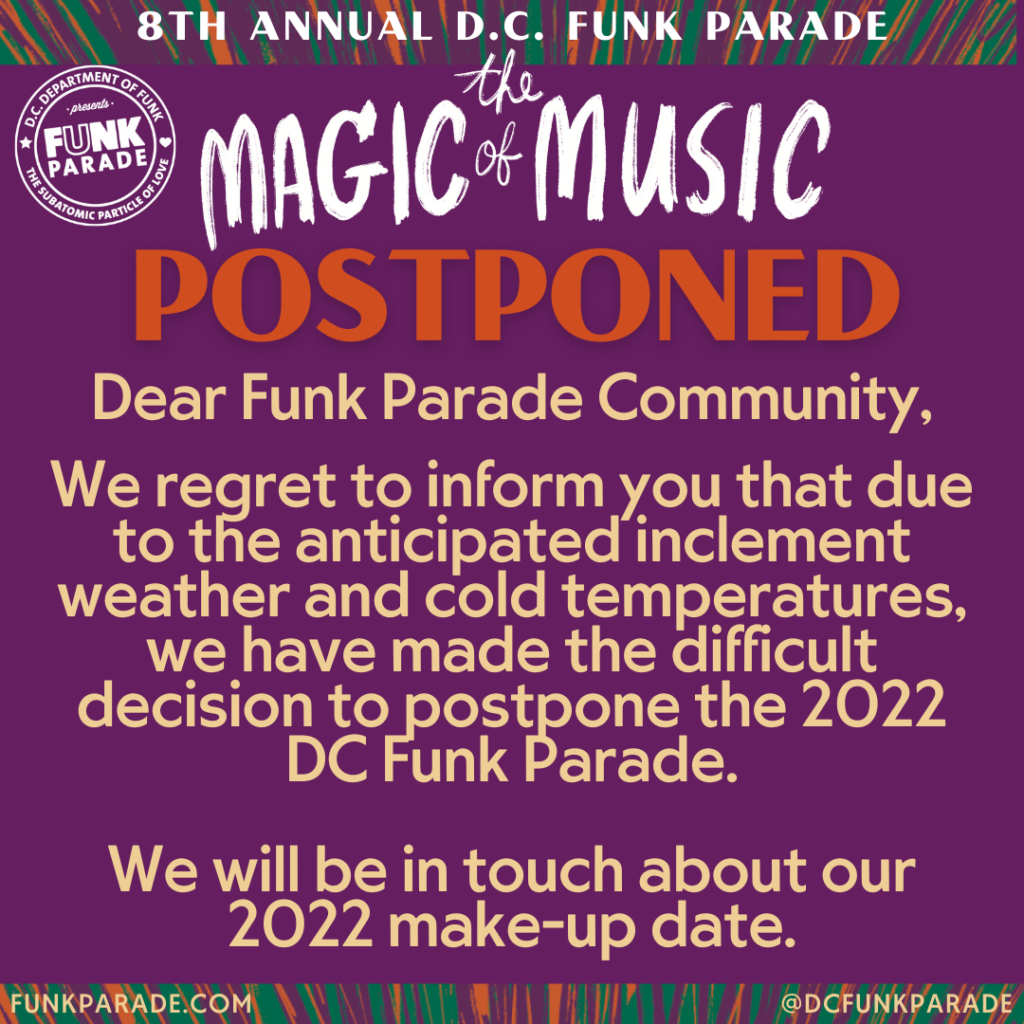